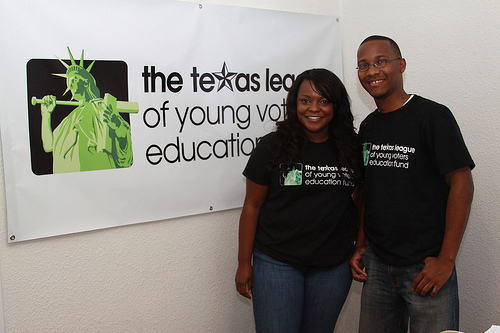 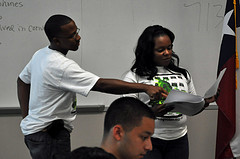 The Texas League of Young Voters Education Fund is led by Christina Sanders and Blake Green, both of which have a strong passion for voter participation and civic engagement. Since high school, Christina and Blake have been working together to educate and engage young people in the democratic process. Now, as college graduates, they are leveraging their knowledge, skill, experience and love for their State  toward creating and sustaining a league of  young voters in Houston and across Texas.

Prior to joining the Texas League’s team, Christina worked in the Office of Texas State Senator Rodney Ellis as a District Aide and Policy Analyst. Prior to joining Senator Ellis’ team,  Christina worked in public policy as the coordinator for Houston Communities for Safe Indoor Air (HCSIA), where she worked on smoke-free policy change and childhood obesity policy. HCSIA has recently been featured as a policy success program by the Robert Wood Johnson Foundation in Princeton, New Jersey.

Christina, a Houston native, received her Bachelor’s of Political Science and Master’s of Public Administration in Public Policy degree from Texas Southern University. She is a proud member of Alpha Kappa Alpha Sorority Incorporated, where she remains active in the Alpha Kappa Omega Chapter.

Prior to joining the Texas League’s team, Blake served as Senior Legislative Aide and Policy Analyst to State Representative Hubert Vo in the Texas House of Representatives, where he was instrumental in drafting and introducing legislation that would allow 17 years olds to vote in primary elections. Blake has also served as Program Advisor to the Mayor’s Youth Council and Teen Task Force in the City of Houston, under the mayoral leadership of Dr. Lee P. Brown and Bill White. In addition, Blake’s background includes working in higher education and in Houston’s corporate energy sector.