The Last #GenYNot Episode of

Rather than have other people speak about the issues impacting young people, Jamira Burley, Jordan Howard and Daniel Leon have created #GenYNot,a platform for Millennials to speak about the problems relevant to their generation.

On December 18th, The League of Young Voters will broadcast the last #GenYNot episode of on YoungVoter.

Please join us and tell us how we can be great in by tweeting using the hashtag #GenYNot. 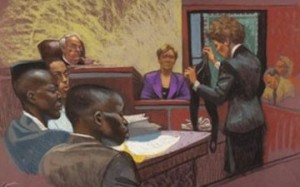 Hello, my name is Richard  Leckie and I am a person  with a felony record living  in the  United States of  America. Those very  words can describe a few  things. It can define  policies that have disproportionately affected African American males for more than  a generation. It can illustrate the lingering effects of Jim Crow Laws on the Black  community as a whole.

According to a recent article posted on MSNBC online, over 5 million individuals are  barred from voting due to criminal records. That’s three times the margin of victory  from the last house midterm elections. This becomes extremely significant when you look at the recent government shutdown. It shows just how important it is to elect officials who actually have their constituents best interest in mind.

The League of Young Voters has been working feverishly to address this issue. Felon disenfranchisement has hampered our efforts to engage some members of the community in the democratic process guaranteed in our U.S. Constitution. These laws hinder the growth and re-integration of citizens with criminal records.

Join the League of Young Voters’ fight to bring lawmakers and individuals with prior felony convictions to the table to fight together to repeal these laws.

It’s cold outside is an understatement. The temperature is 25 degrees but the wind chill makes it feel much cooler. From the distance you can hear the djembes bringing up the roaring crowd as they emphatically chant “15 and a union!”. 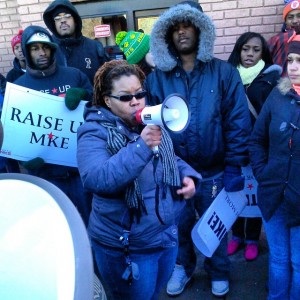 This is a phrase that has come to represent the sentiments of low wage workers across the country. A phrase that has united those same workers in the struggle for fair treatment, wages and the chance to experience the “American Dream”. A phrase that has galvanized workers since Milwaukee’s first strike in April thru the 3rd strike today.

In over 100 cities across the country. including several in Wisconsin, workers, community organizations and faith groups took to the streets to protest the discrepancy in earnings between front line workers and ceo’s. Even though corporations have continued to report record profits across the board there has been no change in front line employees’ pay. Keep in mind these workers, on a daily basis, assist these multinational companies in raking in these record profits. END_OF_DOCUMENT_TOKEN_TO_BE_REPLACED

Dinner with a Conviction 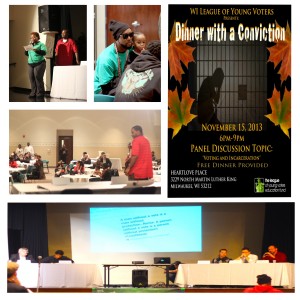 One in eight black men are incarcerated, vs. one in eighty white men. Let me repeat that statistic: a black man is ten times more likely to end up in jail than a white man.

We have all seen the end result: vanishing black men from our cities and neighborhoods, and a prison justice system that disproportionately affects our community. If we want to do good by our people, there are few better places to start than by looking at the “inputs” and “outputs” of our prison justice system. Prisons are succeeding in deciding who has power. They are setting the political landscape such that those directly affected by incarceration cannot change the laws that create the unjust situation. How can we work proactively to model good behavior that keeps our communities safe and young men on track, while simultaneously addressing the well-documented discrimination in our legal code that targets our young men for prison?