Convicted but I Vote 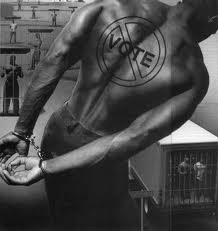 Nearly 6 million American felons have NO voting rights. In South Africa, ALL prisoners are granted the right to vote. According to the Milwaukee Journal-Sentinel, most Americans favor felons being able to vote while on parole.

I, and others like me, often ask why people with felony convictions cannot vote once released from prison/jail?  In America, registering to vote and voting is a badge of honor and an indication of one’s adulthood. It represents your ability to make informed decisions as an adult. Essentially, exercising your right to vote is you saying to yourself and the rest of America that you count.

Voting in our community is an important part of creating and sustaining real change. Most people misunderstood the leadership Mr. Larry Hoover sought to instill in the community when introducing the Growth and Development concept. He urged young men and women to put the guns down and pick up the ballots during the 21st century VOTE movements around the country.

Being a felon on parole and having no control over who speaks for me politically is very disturbing. I, like others, pay taxes and am a part of this community and therefore should have a say in who represents my interests. I acknowledge where I went wrong, however if I am to fully integrate back into society, I must be allowed to partake in what is arguably the most crucial process in our democracy.

The repercussions of being injected back into the community without the right to vote are significant. There are so many people on parole/probation in the city of Milwaukee which represents the voice and power we could have to bring resources to our community. In a community that is socially, politically and economically disadvantaged, we cannot afford to have community members that are not fully engaged in solving the problems in our community.

Will the Supreme Court Dismantle the Voting Rights Act of 1965?

On February 12th, The Wisconsin League of Young Voters hosted our third annual #BarackTalk State of the Union Watch Party in conjunction with NAACP Young Adult Committee, Citizen Action of Wisconsin, and the Center for Progressive Leadership.

We organized an amazing set of panelist to give input preceding the State of the Union speech on issues like gun laws, economy, health care, environmentalism, hip-hop, culture, and politics. We worked together with tastemakers like Rev. Lennox Yearwood from Hip Hop Caucus, Goldie Taylor from MSNBC, Carmen Berkley from Generational Alliance, Shamar Robbins from Green for All and a host of other tastemakers. Milwaukee’s own LaNisha “Monet” Martin produced and streamed #BarackTalk live from Busboys and Poets in Washington, D.C..

More than 30,000 people participated in the multiple online panel discussions throughout the day via Ustream and Twitter. After watching the panel from D.C., Milwaukee watch party participants conducted a deep discussion about raising taxes on gun ammunition and immigration laws.

Want to get updates whenever the Milwaukee League hosts events? Text MILTOWN to 69866

MILWAUKEE, February 19, – As the primary election arrives in Wisconsin, and community activists across the country search for ways to engage voters in critical but low-profile electoral contests, a new generation of young artists is taking to the streets, mixtapes in hand, to inspire political participation through the power of music. The League of Young Voters, a team of artists and activists who talked to more than 800,000 young voters before the presidential election, released their Vote for the Hood: Vol. 1 mixtape today, featuring national talent and local underground artists engaging their peers through the language of hip-hop.
“This isn’t just another mixtape” Shamir Maloney, a Cincinnati artist featured on today’s release, said. “It’s a lyrical movement by the future role models and leaders of America’s black community.”

Produced by Dre Knight, one of Frank Ocean’s collaborators, as well as Milwaukee up-and-comer Rell BeatZ, Vote For the Hood: Vol. 1 features nine tracks of infectious beats and powerful stories made by and for the dreamers of the Millennial generation.

“Dropping mixtapes is nothing new for the League; this is our third mixtape,” Rob “Biko” Baker, executive director of the League of Young Voters said. “Not only did we use our own pool of talent straight from the League’s leaders, but we also linked up with the rising star from New Orleans, Dee-1 and the Red Bull EmSee Champion from Detroit, FowL, to be featured on the mixtape.”