A federal court ruled today that Ohio must continue to allow early voting in the three days leading up to the elections in November.

“On balance, the right of Ohio voters to vote in person during the last three days prior to Election Day — a right previously conferred to all voters by the State — outweighs the State’s interest in setting the 6 p.m. Friday deadline,” ruled the court. “The burden on Ohio voters’ right to participate in the national and statewide election is great, as evidenced by the statistical analysis offered by Plaintiffs and not disputed by Defendants. Moreover, the State fails to articulate a precise, compelling interest in establishing the 6 p.m. Friday deadline as applied to non-UOCAVA [Uniformed and Overseas Citizens Absentee Voting Act] voters and has failed to evidence any commitment to the ‘exception’ it rhetorically extended to UOCAVA voters.”

Check out the full details at Huffpo!

The Republican National Convention wrapped up with Republican presidential nominee and former Massachusetts Gov.  Mitt Romney accepting his party’s nomination and giving what many beforehand were calling “the speech of his life.” Romney described the Obama presidency as such:

“Every family in America wanted this to be a time when they could get ahead a little more, put aside a little more for college, do more for their elderly mom who’s living alone now or give a little more to their church or charity. Every small business wanted these to be their best years ever, when they could hire more, do more for those who had stuck with them through the hard times, open a new store or sponsor that Little League team…This is when our nation was supposed to start paying down the national debt and rolling back those massive deficits. This was the hope and change America voted for.”

Mitt Romney also discussed his future plans if elected President saying he would “plan to create 12 million new jobs”,”reducing taxes on business, not raising them”, and “rein in the skyrocketing cost of healthcare by repealing and replacing Obamacare.”

Though Romney didn’t get into specifics of how he would do such things. Mitt Romney has definitely tried to set himself up as the “anti-Obama” candidate, and the next big national spotlight for Romney should be at the first presidential debate which is on October 3, 9 p.m. EST live from the University of Denver in Colorado and the topic will be domestic policy. 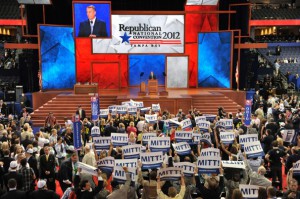 The Republican National Convention three-day event in Tampa wrapped up last night. There were more speeches, a performance by American-Idol winner Taylor Hicks, and we found out who the mystery guest speaker was.

With the RNC now over, attention shifts to Charlotte, North Carolina, where the Democratic National Convention will be held next week. Check in to 99problems next week for coverage from Charlotte. Until then, here were the highlight from the RNC’s final night: END_OF_DOCUMENT_TOKEN_TO_BE_REPLACED

BREAKING: We won on Voter ID in Texas!!

A federal court ruled today that 1.4 million Texans will not need to obtain photo ID in order to vote in the November 6th election this year.

The verdict in Texas v. Holder, the history-making trial to determine the fate of Texas’ Voter ID law, comes after weeks of deliberation that brought the Texas League of Young Voters to Washington, D.C. as defendant-intervenors in the case.

The Texas League argued that the Voter ID law (SB 14), passed in, would have created a significant burden on young and minority voters by not allowing them to use their voter registration card or student IDs to vote as they have been able to in the past. In addition, the law would not allow a valid ID from another state, work IDs used by a state employee, or any expired state-issued personal identification cards or driver’s licenses.

The Texas League of Young Voters made a video during the trial, which garnered thousands of views on YouTube and was shared widely on social networks.

Supporters of the law aimed to use Voter ID to combat voter fraud. Since the law would affect 1.4 million eligible voters in the election, the Texas League and the NAACP-LDF argued that the law did not correctly address voter fraud allegations without disenfranchising a large portion of the Texas electorate.

“This is a validation of the power that people have when they organize,” Christina Sanders, State Director for the Texas League, said. “But the fight is not over. Thousands of young voters who were placed in jeopardy by Voter ID have a major role to play in this upcoming November election, and we are going to organize them every step of the way.”

Now, with the protracted battle over Voter ID behind them, the Texas League will continue mobilizing its network of young organizers on the campuses of historically black colleges and universities to turn out thousands of young voters in the November 6th presidential election.

“Even with the defeat of SB 14, we still have many young voters confused about what the rules are for them to cast their ballots,” Blake Green, Texas League Deputy Director said. “Notwithstanding that, we are committed to continuing to register, educate, engage, and protect the voting rights for young people. Our struggle continues and we will continue to fight.”